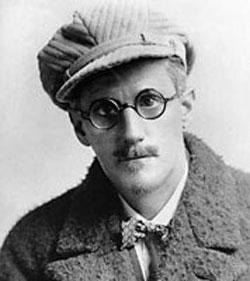 Both are great if you have a fantastically short attention span.

Apparently June 16th is known as Bloomsday to James Joyce fanatics. It's named after the main character of Joyce's novel Ulysses, Leopold Bloom. Usually, Joyceans (is that what they call themselves?) hold public readings of Ulysses on that date, possibly as a means to annoy as many people in the general public as possible.

But this year they're going onto the interwebs. A gentleman has proposed Tweeting Ulysses in 140 character nuggets. Not the whole novel word for word. But miniature eye-blinks of the novel, end to end, spread out over the course of the day on Twitter. And he wants your help to do it.

Because if reading Ulysses doesn't make you develop an attention deficit disorder, seeing it in Twitter form should do the trick.

James Joyce fanatics always seem a little smug, don't you think? Like they've somehow read a book you're too low class to read. They're like Charles Dickens fanatics without the socialization skills. Like they have a membership at a country club and don't want to be seen with you unless you're serving them a mimosa and foie gras. But reading and loving a fancy book doesn't make you fancy. It doesn't make you smart, either. It just makes you snobby. Just saying.

Email ThisBlogThis!Share to TwitterShare to FacebookShare to Pinterest
Labels: great moments in bad ideas, James Joyce, This book is so large my lap went numb, Twitter